Keep Looking Ahead By Faith

By faith Moses, when he had grown up, refused to be known as the son of Pharaoh’s daughter. He chose to be mistreated along with the people of God rather to enjoy the pleasures of sin for a short time. He regarded disgrace for the sake of Christ as of greater value than the treasures of Egypt, because he was looking ahead to his reward | Hebrews 11:24-26

Moses chose the hard life rather than the convienant due to the fact he was looking beyond where he was to where he was going. This reminds me, sins pleasure is for a short time and leaves one left out of an eternal reward. Choosing your way based on the sake of Christ keeps you looking ahead. So, keep looking ahead by faith not accepting that which is convienant but choose the greater reward. 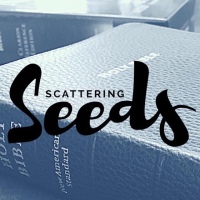 These are the random ruminations of a man on the run. The goal is to run this race of life well, encouraging as many as I can along the way, and to eventually meet my Lord and Savior, Jesus Christ and thank Him for the trip. (I am also prone to shamelessly brag on my perfect grandchildren.)